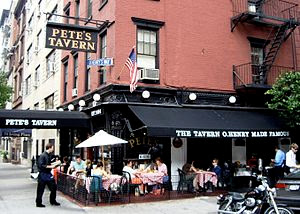 Walking into Pete’s Tavern recently I wondered if the oldest continuously operating restaurant bar in New York City had a door marked ‘Lady’s Entrance,’ as was the custom in the old days, because a lady worth her reputation would not be seen passing by the ancient wooden bar up front , but discreetly take one of the booths in the rear. Women today need not be concerned and like the gents, they too can just belly up to the bar in this pub restaurant, which is historic but not stodgy at all. Located two blocks away from the Gramercy Park neighborhood, at 129 East 18th Street, on the corner of Irving Place, it is the perfect venue to settle in for lunch or dinner and partake of typical bar food, and not expensive at all.

PETE’S PEDIGREE The building which houses Pete’s was built in 1829 and originally known as the Portman Hotel when it was a ‘grocery and grog” store. During the Civil War it became the first official drinking establishment founded in 1864. Tom and John Healy bought the place in 1899 and it became known as “Healy’s.” The longest operating pub restaurant kept up its pace and when selling alcohol was illegal, during prohibition, the bar continued to operate disguised as a flower shop.

THE LITERARY CONNECTION Celebrities may occasionally frequent the place but past legend prevails. The writer O’Henry lived down the street at 55 Irving Place from 1903-1907, and Healy’s appears in his short story “The Lost Blend” under the name Kenealy’s. Legend has it that he wrote his well-known story, “The Gift of the Magi,” in Healy’s second booth from the front. As a matter of fact I noticed a heavy bearded young man who occupied the same booth, perhaps channeling "O’Henry,” as he was writing in his note pad.

A CONVIVIAL PLACE Pete’s Tavern can get a bit crazy, loud and crowded in the bar area especially on Saint Patrick’s Day when it is decked out for the holidays, but on any average day the mood is casual with a steady stream of customers cramming in for an after-work libations during ‘Happy Hour,’ whilst choosing songs from the jukebox. The seating is quite pleasant, especially in the Skylight Banquet Room, an upstairs private party space, but in warmer weather I prefer the outdoor dining experience.

FOOD FOR THOUGHT It’s a classic American/American Italian menu, plus great daily specials, a place for the classics like chicken/veal piccata or marsala and my favorite, eggplant parmigiana and delicious calamari. I would highly recommend their burgers; they’re quite substantial and tasty. Best nights are Thursday, Friday and Saturday. 212.473.7676.