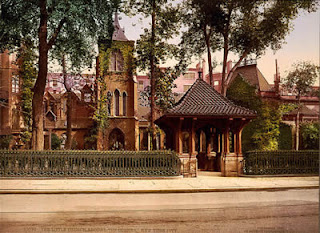 Nestled in the middle of the block, at 1 East 29th Street in the NoMad neighborhood of Manhattan, New Yorker’s might suddenly stand in awe and admire the site of a quaint Episcopal, Church of the Transfiguration, which became known as the Little Church Around the Corner. Time is freeze framed where the sanctuary is set back from the street behind a garden, which in contrast to the skyscraper giants creates a facsimile of the English countryside. A refuge from modern society, the church has long been an oasis for New Yorkers of all faiths, who relax in the garden, pray in the chapel or come for the free lunchtime concerts.

LEGENDARY EPISODES The church’s storied history always stressed service to the poor and oppressed from its earliest days. The congregation was founded in 1848 by the Rev. Dr. George Hendric Houghton and worshipped in a home at 48 East 29th Street until church was built and consecrated in 1849. Rev. Houghton was a man ahead of his time and was a brave supporter of the oppressed. In 1863, during the Civil War Draft Riots, Houghton gave sanctuary to African Americans who were under attack but when rioters showed up at the church, Houghton turned them away saying “You white devils, you! Do you know nothing of the spirit of Christ?”

SERVICE TO THE OPPRESSED
Actors were among the social outcasts in the 1870s so it is no wonder that they found refuge at the church. When an actor named George Holland died a rector of Church of Atonement, which is no longer extant, refused to conduct funeral services for the actor, he suggested, “I believe there is a little church around the corner where they do that sort of thing.” Joseph Jefferson, a fellow actor who was trying to arrange Holland’s burial, exclaimed, “If that be so, God bless the Little Church around the Corner!” and that is how the church began a longstanding association with the theater and affectionately acquired the quaint name. In 1923, the Episcopal Actors’ Guild held its first meeting at Transfiguration and celebrated actors Basil Rathbone, Tallulah Bankhead and Rex Harrison have served as officers or council members.

THE LITTLE CHURCH AROUND THE CORNER is also a favorite wedding site. When P.G. Wodehouse, was living in Greenwich Village he married his wife Ethel at the Little Church in 1914. Not surprising, subsequently Wodehouse set most of his fictionalized weddings at the church; and in the hit musical “Sally” that he wrote with Jerome Kern and Guy Bolton, paid tribute to the Bohemian congregation where so many lives began and ended. Notably Sir Rex Harrison was memorialized at the church upon his death in 1990 and Maggie Smith and Brendan Gill were among the celebrated stars who spoke at the service. The Little Church’s association with the theatre continues today with programs and performances by talented actors.

In 1967, the Little Church Around the Corner, was designated a New York landmark and in 1973 it was listed on the national Register of Historic Places. www.littlechurch.org. Historian guides often give tours of the church, contact the church for the schedule.

Posted by Polly Guerin at 9:34 AM No comments:

Calling all train enthusiasts, youngest train fans and history buffs--- GRAND CENTRAL TERMINAL’S 100th birthday is in February, 2013, and you’re invited to a year-long party with special family tours and scavenger hunts in the place that is known as the “crossroads of a million lives.” Celebrate by visiting the New York Transit Museum Gallery Annex at Grand Central Terminal at 42nd Street and Park Avenue, Shuttle Passage adjacent to the Station Master’s Office, where you’ll find popular exhibits to entertain and educate. 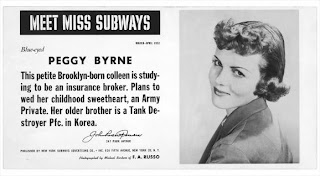 THE NEW YORK TRANSIT MUSEUM located on the corner of Boerum Place and Schermerhorn Street, in Brooklyn Heights, one of the city’s leading cultural institutions, is the largest museum in the United States devoted to urban public transportation history, and one of the premier institutions of its kind in the world. Since its inception, over a quarter century ago, the Museum, housed in a historic 1936 IND subway station in Brooklyn Heights is the custodian and interpreter of the region’s extensive public transportation networks, which has grown in scope and through its public programs. The NYTM’s galleries feature popular exhibits such as steel, Stone and Backbone, which recounts the tale of building New York City’s 100 year old subway system.

THE FATHER OF THE NEW YORK SUBWAY SYSTEM Legend has it that this rich and vibrant history would not be complete without mentioning Abram Stevens Hewitt, one time mayor of the City of New York (1887-88). During his administration he concentrated on major municipal improvements in the city. He was noted for his public spirit and is best known for the planning and financing of the New York subway system. By the 1890s, new elevated lines were being used extensively by the city’s prosperous middle and upper classes on the way to and from their daily activities. Hewitt is recognized as the “Father of the New York Subway system.”

MEET MISS SUBWAYS: New York’s Beauty Queens 1941-1976, in Brooklyn Heights through March 25, 2013. Miss Subways was New York’s most iconic and democratic beauty contest. Young women of mostly middle and working class backgrounds were selected, not just for their looks, but for the aspirations and dreams they had for their futures, and during l942-76 their portraits and biographies were displayed in subway cars throughout the city. You can see their current and former portraits and hear their voices in this poignant exhibit.

WITH MILES AND MILES OF RAILS AND TALES TO TELL TAKE TIME TO VISIT THE TRANSIT MUSEUM THIS YEAR. Contact www.mta/info/museum

Posted by Polly Guerin at 10:17 AM No comments: 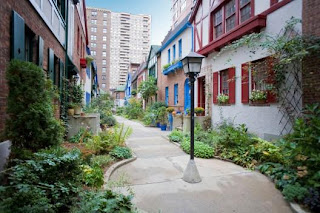 New York City is full of surprises! No need to travel to Europe to get a glimpse of an English country village. Just get off the beaten path and go to the upper west side and stroll down from Broadway to West End Avenue and you will literally stumble upon Pomander Walk located between 94th and 95th streets.. This picturesque charming village conceals eight attached Tudor-style houses hidden behind locked wrought iron gates, so entry is very private. One wonders, however,—who lives here?—and how and who was the builder of the Lilliputian town?
POMANDER WALK INSPIRED Once upon a time, after a run in London, the play "Pomander Walk," a romantic comedy came to Broadway in 191l--and there you are-- that’s how this hidden treasure got its name. Thomas Healy, an Irish immigrant who made his fortune as a restaurant owner and ardent theater lover, purchased the land for the walk in 1920. He commissioned the architects Shiras Campbell and Beverly King to build a residential enclave there, and asked them to replicate the country village of the sets from “Pomander Walk.” The sets were used as inspiration but the architects altered the original design to look more Tudoresque.
WHO LIVES THERE? It is legend that Healy built Pomander Walk to attract actors and Pomander did draw the theatre folk. It is said that Lillian Gish, Humphrey Bogart lived there, but it is more than certain that that flamboyant Rosalind Russell and Paulette Goddard did have digs of their own.. At first the houses were built with two bedroom apartments, but later renters combined the two making the house into a family home trimmed with bright reds, greens and blues, some with shutters, some with window boxes and a miniature garden in front. Pomander Walk was landmarked by the city in 1982.

As high-rise buildings hover over Pomander Walk the Lilliputian houses are miniaturized and made even more intriguing by the sheer charm of the place . Even if you fancy having the opportunity to live there, affording it can be a drawback. In today’s market, a single family house can go in the millions and an apartment pricey as well. For now we can only peer through the gates at a living stage inspired by the sets in a play by the same name.

Posted by Polly Guerin at 1:47 PM No comments: