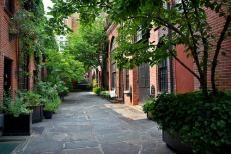 New York’s hidden treasures can be just down a side street in historic Murray Hill section of the city where a miniature village exists. Still framed in time it lets us vicariously travel back to the Civil War era in old New York. On a nonchalant stroll we may find ourselves in front of the locked gate on 36th street between Lexington and Third Avenues where an intimate group of 10 picturesque houses are ensconced with traces of foliage, potted flowers and window boxes to complete the picturesque site.
ORIGINALLY STABLES These two storied structures were originally stables owned by old New York families who lived in Murray Hill and now are a testament to historical preservation. Let’s not forget that this area was considered in those days as a very tony part of old New York and many celebrated New Yorker’s moved to this area, far uptown some said at the time. The structures are brick, some in their natural brownstone color and others painted various shades of gray and green while others are black. To the most part they are considered as early Romanesque Revival.
THE BUILDER The ten brick stables were build in the 1850s by a local builder John Sniffen and were converted into town houses in the 1920s with a studio at the south end. Horses once watered at the hand pump in front of the rear way at the far end of the flagstone-paved alley. Plaques of Greek horsemen adorn the rear wall by the sculptress, Malvina Hoffman, who maintained her studio there during the 1920s and 30s. When carriages were replaced by automobiles, individual premises were converted into dwellings with common access to the alley.
THE AMATEUR COMEDY CLUB Number One on Sniffen Court has been owned by the Amateur Comedy Club since 1884, and registered as a legitimate theater, albeit a private one. It is not open to the public but stages legitimate shows strictly by and for the amusement of its own members and social circle. I was fortunate to attend several performances as a guest of a member and I am reminded how truly professional these thespians are performing as they do staged classic revivals. The only time the club broke their private rule was during WWI, when it became a dramatic theater company for the entertainment of military service members.
THE MURRAY LADIES ENTERTAIN There are other historic sites worth seeing while you are in Murray Hill. Legend has it that Mrs. Mary Lindley Murray and her daughters entertained British General Howe and his troops for tea, while General Putnam and his American troops moved northward. The Murray home, Belmont, was located at Park Avenue and 37th Street, on their farm known as Inclenberg. A bronze plaque honoring Mary Lindley Murray, placed by the Daughters of the American Revolution, is embedded in a boulder in the southern mall at Park Avenue and 37th Street.
Visit Sniffen Court, a New York Historic District and National Register of Historic Places, at 150-158 East 36th Street. IMAGES, courtesy of the Estate of Dean Avery, of historic and architecturally important buildings in Murray Hill are available for purchase as black-and-white note cards, prints and a map through www.murrayhillnyc.org.

Posted by Polly Guerin at 7:55 AM No comments: