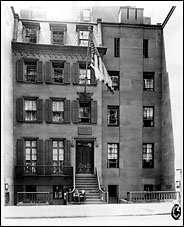 The flamboyant, Rough Rider, Theodore Roosevelt is a bona fide New Yorker and his boyhood home attests to this fact. One of the historic sites in New York that deserves a visit is the brownstone home of the only President born in New York City, Theodore Roosevelt, who would grow up to be our 26th President of the United States and immortalized on Mount Rushmore. Imagine strolling near Gramercy Park on 20th Street between Broadway and Park Avenue South and there at 28 East 20th Street is the four-story brownstone, Roosevelt’s birthplace. After Roosevelt’s death in 1919, the site was purchased by the Women’s Roosevelt Memorial Association and rebuilt and decorated with many of its original furnishings by Roosevelt’s sisters and wife. The Theodore Roosevelt Birthplace National Historic Site, preserved with artifacts, is a legend in history and contains five period rooms, two museum galleries and a small bookstore. His rough rider uniform is among the rare objects on display.
TR’s BIRTHPLACE "Teedie", as young Roosevelt was nicknamed, was born on October 27, 1858 into a wealthy family in New York City, but the bright boy suffered from asthma and was tutored at home studying natural history. To improve his health Teedie began an exercise program at the at the house’s outdoor gymnasium that to compensate for his physical weakness, he started a lifelong passion for the “strenuous life.” Encouraged by his father, Teedie began exercising and boxing to combat his poor physical condition. Fortified and able he eventually attended Harvard University, where he studied biology.
THE ROUGH RIDER After graduating from Harvard, Roosevelt pursued his boyhood dreams, as a rancher, naturalist, explorer, author and Colonel of the Rough Riders, the first U.S. volunteer Cavalry Regiment serving in the Spanish-American War. His political service included reforming the U.s. Civil Service Commission. He was a commissioner, 1895-97 of the New York City Police Department and reformed what was considered at the time to be the most corrupt police force in the country.
BECOMING PRESIDENT After two years as President of the New York Board of Police Roosevelt was appointed Assistant Secretary of the Navy in 1897-98. He led his Rough Riders up San Juan Hill in Cuba and after this courageous charge he was elected Governor of New York and then vice president to William McKinley. TR became president when President McKinley was assassinated in September 1901. Roosevelt was 42 years old  when sworn in as President making him the youngest president ever. As President, Roosevelt pushed progressive reforms, and brokered a peace agreement between both sides in the Russo-Japanese War, The Treaty of Portsmouth was signed September 5, 1905 ending the conflict and earned TR a Nobel Peace prize.

THEODORE ROOSEVELT WAS DISTANTLY RELATED BY BIRTH TO THE 32ND PRESIDENT OF THE UNITED STATES, FRANKLIN DELANO ROOSEVELT (THEY WERE FIFTH COUSINS), AND HE WAS THE UNCLE OF FRANKLIN D. ROSSEVELT’S WIFE, ELEANOR ROOSEVELT. SAGAMORE HILL, NEAR OYSTER DAY, LONG ISLAND, SERVED AS TR'S SUMMER WHITE HOUSE,

Posted by Polly Guerin at 7:58 AM No comments: